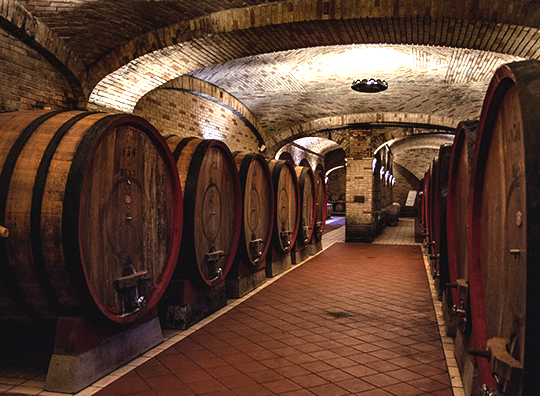 A great passion and solid technical skills prompted Ferruccio Deiana to found a winery, finally fulfilling a long-time dream to have his own vineyards and make his own wines.

His mission was drawing the attention of winelovers to Basso Campidano and Parteolla, lands of beautiful nature and rich culture. This part of Sardinia, extending between Cagliari and the crags of Punta Serpeddì, in the rugged territory of Sarrabus-Gerrei, is celebrated for its sweet hills and fertile valleys. Since antiquity, these lands have been a lucky realm of grapevine, wheat, and olive.

Ferruccio's passion was immediately supported by his wife, Mariagrazia. Later it was met by the enthusiasm of his son, Dario, who helped Ferruccio for years until he finally joined the winery officially, following his father's steps with comparable passion and commitment.

The winery has always been open to cutting-edge research and experiences, from all over the world, concerning viticulture and winemaking methods. The wines are produced by leveraging modern, high-level, sophisticated techniques.

The winery lies in the territory of the municipality of Settimo San Pietro (Cagliari), mostly in a place called Su Leunaxi.

Here, traditional knowledge meets modern technologies to give great wines. The winery extends for 100 ha, and cultivars have been carefully selected through the years, in accordance with the pedological characteristics of the soil. The vineyards were planted on rolling terrains using a cordon-trained Guyot system. Water is provided regularly by a drip irrigation system and olives line the internal roads of the estate.

The original core of the vineyards (40 ha) was planted in the early 1990s at Su Leunaxi, in the countryside of Settimo San Pietro, while the area of Sibiola, in the municipality of Serdiana, hosts the new vineyards.

The location for the vineyards and the grape varieties have been selected according to the characteristics of the different terroirs, to guarantee a high-quality winemaking. Each vineyard has its own characteristics, and therefore each of them deserves special care. From each vineyard, a peculiar wine is obtained, expressing a certain native grape at its best.

In all the vineyards, the soil has a depth of one meter to one meter and a half, which is optimal to host the roots of the grapevines. The drainage is very good from the surface to the bottom, the marl substrate slowing down the water infiltration. The drip irrigation provides the necessary water supply even in the hottest months, favouring an optimal development of the grapes and ensuring their perfect maturation.

"Good wine is born in the vineyard," say good winemakers from unmemorable time. And the quality of Deiana's wines also depends on the low yield of each vine. Each spur has typically just 5-6 buds; only in the case of the Vermentino, the spurs can sometimes have 7-8 buds each.

The winery is modern, and the wines are produced using the most recent methodologies and state-of-the-art technical equipment. The grapes are selected and harvested at the right level of maturity. The different winemaking processes (fermentation, maturation, aging) are carried on carefully, and are constantly monitored by Ferruccio, Dario and their collaborators. The laboratory provides all the necessary equipment to perform frequent tests.

We are looking forward to meeting you at our winery! In the meantime, you can explore it with Google Street View. But this is just an anticipation: in the dedicated section of the web site, you can check the events we organize. Come tovisit us!